“Science and Engineering as Pathways to Individual Success

and Building A Culture of Exploration” Carlos I. Noriega was born in Lima, Peru and grew up in Santa Clara, California, earning an undergraduate degree in computer science from the University of Southern California, and two master’s of science degrees (in computer science and space systems operations) from the Naval Postgraduate School. After a distinguished active service military career as a pilot, instructor, and Space Surveillance Center Commander for the United States Space Command in Colorado Springs, Colorado, Noriega was selected by NASA in December 1994, and he reported to the Johnson Space Center in March 1995. He completed a year of training and evaluation and was qualified for assignment as a mission specialist in May 1996.

Noriega flew on STS-84 in 1997 and STS-97 Endeavour in 2000. He has logged more than 481 hours in space, including over 19 EVA hours in three spacewalks. Following STS 97, Noriega trained as the backup commander for the Sixth Expedition to the International Space Station and later as a member of the crew of STS-121. In January 2005, Noriega retired from the Astronaut Corps. He left NASA in August 2011. Noriega’s final assignment was as the Director of Safety, Reliability and Quality Assurance for the Constellation Program at Johnson Space Center. Dr. Ramos is board certified in obstetrics and gynecology and a Fellow of the American College of Obstetrics and Gynecology. She is the Chair of the American Medical Association’s Minority Affairs Consortium; serves on the steering committees for the National Hispanic Leadership Fellowship and National Commission on Healthcare Disparities, and is a March of Dimes board member. She is also a spokesperson for cervical cancer awareness and emergency contraception for the Los Angeles County office of Women’s Health and was appointed to the California Women’s Health Council Commission in 2006. She joined the CMA Foundation Board of Directors in 2008. She received “Best News Anchor” recognition by the prestigious LA Press Club as well as Emmy’s and Telly awards for her reporting, producing, anchoring and writing skills. In 2015, she won an Emmy for Regularly Scheduled Daily Morning Newscast of which she hosts. Most recently, in 2016 she won an Emmy for Light News Story Multi-Part Report for Junipero, a timely story that put in perspective the human and social impact of the missions in California.

She was honored her with the Excellence in Broadcast Journalism Impact Award by the National Hispanic Media Coalition and has been recognized numerous times by the California Senate and the City of Los Angeles for her contributions to the betterment of the community and people she serves.

She is passionate about environmental, social and education topics. Teissier serves on the board of American Heart Association as well as the board of directors of Act-Today, a not for profit organization that provides therapy and services for families with people with Autism.

She has been recognized as “Ambassador” by the City of Hope and has helped host Mexico’s “Teleton” year-after-year.

Born and raised in Mexico City, Gabriela grew up speaking Spanish, German and English, becoming fully trilingual before she moved to the United States. 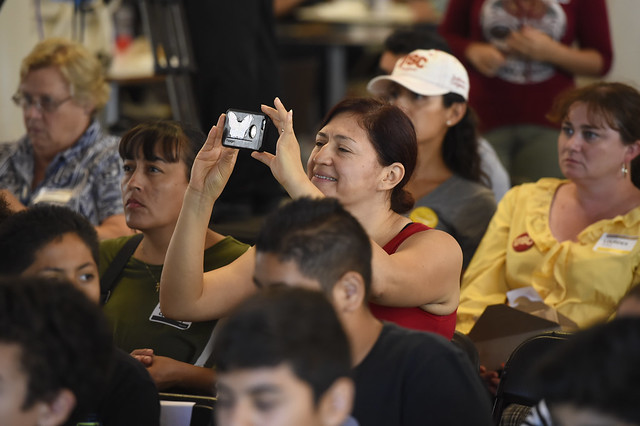 \"Preparing for the Biotech Decade\" will be held in the new Campus Student Center on the East LA Community College campus.

K-12 Educational Success: Setting an early foundation in math and science can help a child get on track for academic success and college preparedness. This session will provide parents and educators with insight into college prep, STEM majors in college, exploring professions, and creating an early roadmap to success. Job Training Opportunities: The growth of the biotech industry spurs growth in a number of technical jobs, from lab technicians to IT to manufacturing operations, many of which require trade certification or associate’s degree education for entry. Learn about the opportunities available to employees with the appropriate credentials and training. Research Careers: Biomedicine is on the cusp of breakthrough research in so many aspects of human health, from clinical patient care to cutting-edge discoveries. College and high school students are invited to hear from researchers and graduate students about career paths for STEM majors who pursue advanced degrees.

This event is catered by Homegirl Cafe, one of the six social enterprises of Homeboy Industries. Homeboy Industries provides hope, training, and support to formerly gang-involved and previously incarcerated men and women allowing them to redirect their lives and become contributing members of our community.